On June 6th, the first Upstate Data Summit was held on the campus of Syracuse University. Over 70 attendees came from across Upstate New York to hear how cities like Buffalo, Rochester, Syracuse and Schenectady are using data to improve operations and make service delivery more efficient and more equitable.

The event featured speakers from Upstate cities and a keynote presentation from Syracuse Mayor Ben Walsh. The event concluded with a panel discussion that included city representatives from the City of Binghamton and the NYS Department of State’s Division of Local Government Services. 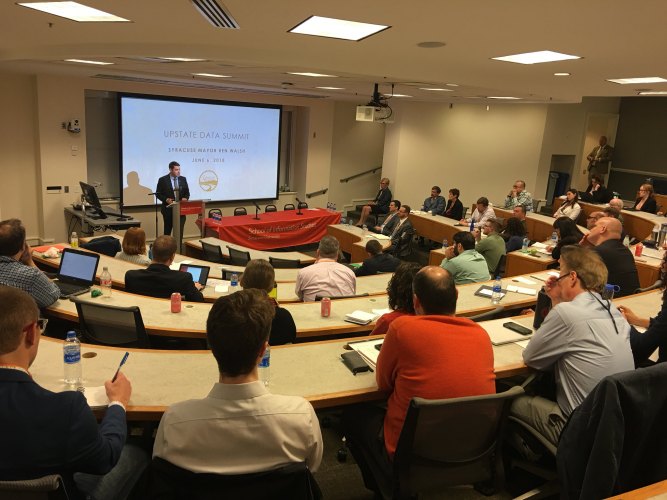 The presentations from city leaders can be downloaded at the following links:

Preparations for a follow up event next year are already underway. Stay tuned!

Getting a speeding ticket in the State of New York can be a traumatic – and expensive – experience.

Drivers convicted of speeding often face penalties and fines, and repeated or excessive offenses can result in the loss of a license. But in some places in New York State, drivers issued a speeding ticket may see a very different outcome than one would typically expect: a smaller fine, the avoidance of long-term penalties, and – oddly enough – additional money in local government coffers.

Last year, I wrote a post detailing some data science techniques that used a data set from the State of New York on traffic violations. This is an incredibly rich data set and it’s awesome that the state makes this available as open data. However, the issuance of traffic tickets only tells part of a larger story – since the release of this initial data set, the state has now released data on traffic ticket convictions. Comparing both of these data sets allows us to see the full picture of what happens when a traffic ticket is issued in the State of New York, from issuance all the way through to adjudication.

An examination of these data sets show that – in certain areas of the state – tickets issued for speeding are much more likely to be negotiated down to a lessor offense that allows drivers to avoid a penalty from the Department of Motor Vehicles (DMV), and actually provides a backdoor benefit for local governments.

END_OF_DOCUMENT_TOKEN_TO_BE_REPLACED

One of the most common impediments governments face in making better use of their data – and releasing it to the public – is data quality.

Since much of the data that municipal governments maintain and use relates to a specific location, ensuring that address data is complete and accurate can make this data much easier to use, and much more valuable. There are some easy techniques that government can utilize to better ensure that address information – whether submitted by citizens themselves or collected in other ways – is as complete and accurate as possible.

In addition, once collected, taking steps to standardize address information can make it much easier to share within municipal government, as well as with other governments and external data users.

END_OF_DOCUMENT_TOKEN_TO_BE_REPLACED

Along with releasing open data themselves, one of the most important things Upstate governments can do to use data to enhance services and make better decisions is to leverage data that is available from counties and the state.

The New York State open data portal is an invaluable resource that contains important data sets that Upstate governments can use at no cost to enhance their operations and make smarter decisions. This post will explore some of those data sets, and some of the things that can be achieved with data from the State of New York.

END_OF_DOCUMENT_TOKEN_TO_BE_REPLACED

Open data, especially open government data, is a tremendous resource that is as yet largely untapped. Many individuals and organisations collect a broad range of different types of data in order to perform their tasks. Government is particularly significant in this respect, both because of the quantity and centrality of the data it collects, but also because most of that government data is public data by law, and therefore could be made open and made available for others to use. Why is that of interest?

Here are three reasons why publishing open data is important for local governments.